Infragistics is celebrating its 30th anniversary! Throughout the years, Infragistics built its strategy around two strong pillars: embracing the latest and greatest technologies, and focusing on high-performance and speed. These main pillars enriched developers, and their communities, with toolsets that made development enjoyable, and productive at the same time.

Infragistics presents the Ultimate suite as a single platform for UX design, and enterprise app development, for the web, desktop, and mobile. The suite offers more than 100 beautifully styled, high-performance grids, charts, and other UI controls.

Infragistics thought of every detail in the development life-cycle process. They offer prototyping tools to help you sketch your designs from the client’s early inception stage, allowing you to work on the UX, finalize the layout, and even orient the developer to build the final app.

In this introductory article on their Ignite UI suite, I will explore the different platforms supported by Infragistics, and will then delve into more details on the Ignite UI for Angular suite.

Infragistics provides UI components for a variety of frameworks and platforms. This includes ones for the Web (ASP.NET, Angular, React and JavaScript), Desktop (Windows Forms and WPF), and Mobile (Xamarin, iOS and Android).

The components are served in packages. For instance, when developing with React, you would only install the packages for Ignite for React.

Here’s a list of the supported platforms and their corresponding components.

Ignite UI for Angular Infragistics wraps together more than 50 Material-based UI native components, designed, and built on an Angular platform.

Infragistics offers the Indigo.Design Desktop to build prototypes for User Stories to share with peers for review, and collaboration. This software comes in two flavors for both Windows and Mac OS machines. Here’s a link to the software’s official documentation.

In addition to all the packages listed, Infragistics puts great effort in delivering an easy-to-follow, and extensive documentation for all their platforms, and UI components. You can consult the document anytime by visiting the Infragistics Help documentation website.

Also, Infragistics offers a set of reference apps that you can look at, take ideas from, and that allow you to see, in real-time, how the UI components are being used and integrated inside apps. You can have a look at the reference apps by visiting the Infragistics Apps Gallery website.

Infragistics has placed a great emphasis on developing their Angular suite. They offer native UI components for Angular that are based on the Google Material design standards. In addition, they enrich the Angular app development with a unique, and valuable experience, by offering the Sketch UI kits.

The Sketch UI kits have a one-to-one mapping with all the Angular components they offer. The designer opens Sketch, loads the Sketch UI kits, and then designs the app screens, using “native” Ignite UI for Angular components. The end result is a prototype that is uploaded to the Infragistics Cloud, and shared with peer developers, designers, and stakeholders to review, comment on, and use to produce a final design prototype.

The developers can then take prototype URLs, go to Visual Studio Code per se, install the Infragistics extension, and generate code assets for their Angular app, based on the prototype. The extension generates Angular Components based on the screens baked inside the prototype.

Before you can start using Ignite for Angular, you must have the following installed on your machine:

Infragistics takes that extra step, and offers the Ignite UI CLI. This is a Command-Line Interface by Ingratistics.

The easiest way to create, and scaffold an app with Infragistics, is to use the CLI. This CLI is not only used with Angular, but can also be used for React and jQuery apps.

Here’s a step by step guide on how to generate your first app using the Ignite UI CLI.

You start by installing the Ignite UI CLI as a global dependency on your machine by issuing the following command:

Once the installation process is finished, you can start the tool using either guided experience or specific commands.

For instance, to create a new Angular app, you issue the command:

To add a new Component to your app you issue:

You can read more about the CLI on the Ignite UI CLI official page.

Going through all of the Angular components in depth now, isn't useful. I have highlighted a few that interested me, and will give you a small overview of what is offered.

The Financial Chart is one of the most popular and advanced charts offered by Infragistics. This type of chart is used to visualize financial data using a simple, and intuitive API.

To play with a live Financial Chart, here’s a sample hosted on StackBlitz: {% stackblitz angular-ytbzfi %}

Infragistics Angular Data Chart is the most extensive, and feature-rich, chart on the web today. It supports chart compositions (multiple charts overlaid), axis, series, legend, and annotation layers. Being highly customizable, it offers many more options, and features.

Something special about this chart is the long list of series types supported by default. The list includes, but is not limited to:

An example of a Radial Series chart is as follows: 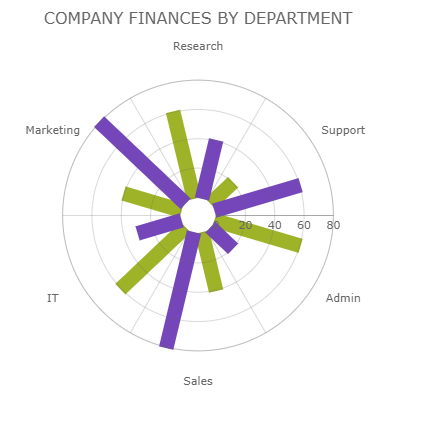 To play with a live Data Chart, here’s a sample hosted on StackBlitz: {% stackblitz angular-bv857d %}

You apply the igxMask directive on a text input field, and you can control the user input, and format the visual value, based on configurable mask rules. You have a rich set of masking rules to choose from.

To use this directive, start by importing the following Angular Modules into your app module:

Then you can apply an Input Mask inside your components. The example below shows how you can use a Phone Input Mask:

If you would like to play with a live Mask component, here’s a sample hosted on StackBlitz:

The Navigation Drawer is one of my favorite components. It provides a smooth and smart navigation experience for developing Web apps that will be used on Mobile devices.

The Navigation Drawer is a side-navigation container. It can rest above content, and slide in/out of view or be pinned to expand/collapse within content. The component is highly configurable via its input properties: Mode (pinned, open, mini-variant) and Position (Right and Left). The mini-variant mode renders the side-navigation bar with icons only instead of showing both the icon, and text of the item. 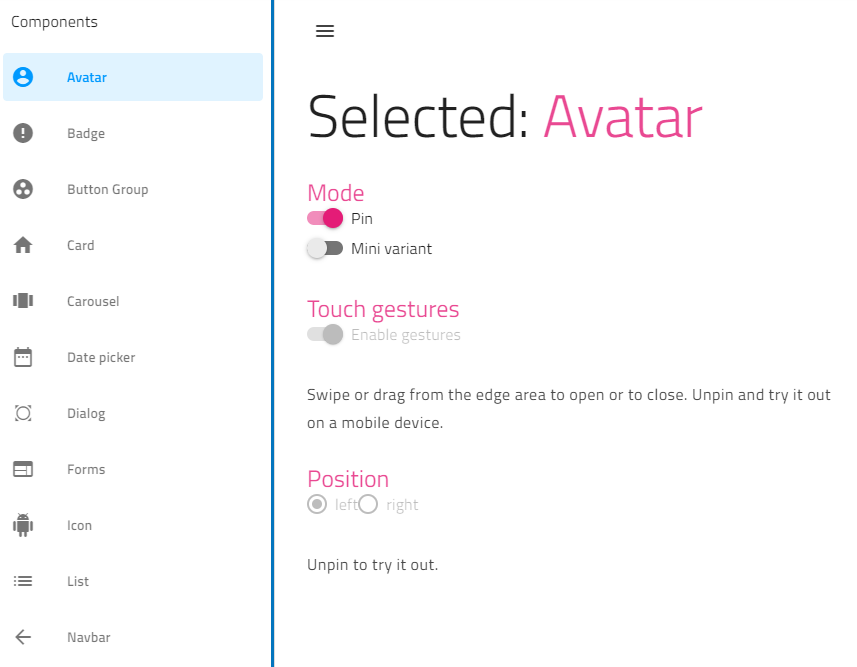 Installing and using this component is no different from the rest of component offered by Ignite for Angular.

To play with a live Navigation Drawer component, here’s a sample hosted on StackBlitz: {% stackblitz angular-rsizth %}

The Layout Manager directive, which is part of Ignite UI for Angular, is a wrapper on-top of Flexbox. You can organize and structure your HTML markup without having to write a single CSS selector for the layout.

The Layout Manager focuses on giving Angular developers a seamless design experience when developing, and laying out their apps.

To use this directive, start by importing the IgxLayoutModule Angular Module into your app module:

Then you can apply the igxLayout, igxFlex, and other related directives to your HTML markup as follows:

If you would like to play with a live Layout Manager component, here’s a sample hosted on StackBlitz: {% stackblitz angular-vtetkk %}

The Grid is, by far, the most customizable Data Grid currently existing for the Angular ecosystem. The team at Infragistics have thought of every single detail a developer might need and want to customize in a Data Grid.

You are in the presence of the Infragistics version of Excel Spreadsheets! 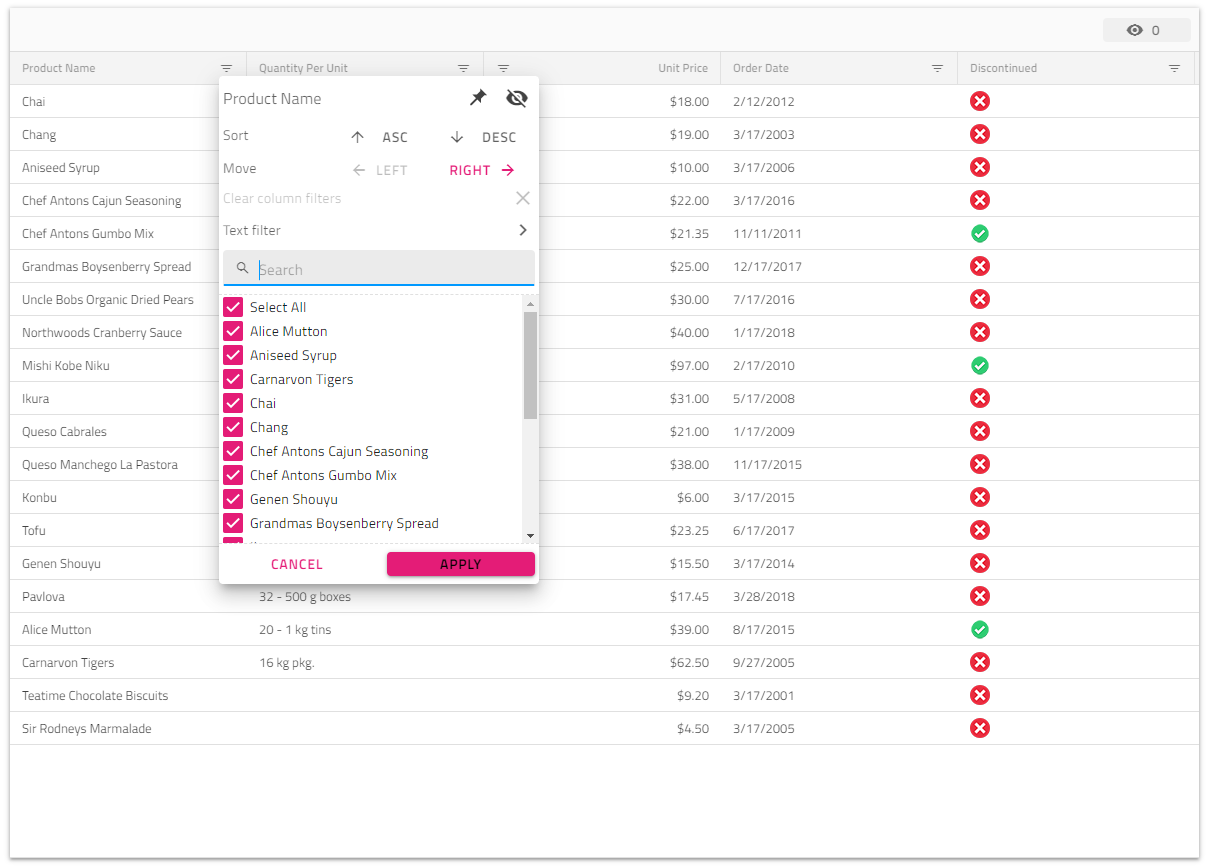 Importing and using the Data Grid cannot be simpler!

Start by importing the IgxGridModule Angular Module to the app module:

To embed a Data Grid inside the HTML markup, add the following component:

To reference the Data Grid from inside the Angular Component code-behind, add the following:

It’s that straightforward to start using the Data Grid component for Angular!

Check the Infragistics extensive docs to learn more about customizing, and enabling more features in the Data Grid.

If you would like to play with a live Data Grid component, here’s a sample hosted on StackBlitz: {% stackblitz angular-4oqzke %}

An Excel Library comes as part of the Ignite UI for Angular. The Infragistics Angular Excel Library allows you to work with spreadsheet data using familiar Microsoft Excel spreadsheet objects like Workbooks, Worksheets, Cells, Formulas, and many more.

Have a look at the Excel Library page for more examples on all the options, and possibilities available for you.

Moreover, Infragistics offers an Export to Excel service that you can use inside your Angular components, and services.

To use this service, you start by importing the IgxExcelExporterService into the app module:

Then, you inject the IgxExcelExporterService into the constructor of the component or service:

And finally, to export your data to Excel, you call the exportData() function:

The Indigo Design System offered by Infragistics caught my attention to the extent that I wanted to dedicate a section to talk about this design system, and its versatility, especially for designers, and developers working on Angular apps.

You’ve got your designers, and developers, both integrated into a single platform. This design system has a workflow that is depicted as follows:

Still, what has been discussed in this article is the tip of the iceberg when it comes to what the modern and efficient development ecosystem Infragistics offers!

The Infragistics design model for their components and controls is, by far, one of the easiest, and most straightforward model to follow. For instance, when using the Ignite UI for Angular components, you get the feeling that you are using Angular built-in components and services. They’ve done an excellent job giving Angular developers a seamless experience when using their UI components.

Author, Developer, and Mentor: Professional ASP.NET 3.5 Security, Membership, and Role Management with C# and VB | A Complete Guide to VueJS