Nowadays, nginx is probably the most popular web server used for web apps. It's lightweight, fast, and easy to configure. It's not always necessarily used as a web server though. Given that many frameworks today come with a built-in web server, nginx is sometimes used in front as a reverse proxy and/or a load balancer. In this blog post, we will show you how to deploy nginx as a reverse proxy on Heroku.

🔗What Is a Reverse Proxy?

While a forward proxy, often called simply a proxy, sits in front of a group of clients and has the purpose of "hiding" those clients from the rest of the Internet, a reverse proxy sits in front of web servers and "hides" them from clients accessing them. From a client's perspective, the client is unaware that they are accessing a backend web server - they are only aware of the reverse proxy.

The below image shows both types of proxies and where they are placed:

🔗Implementing a Reverse Proxy in Heroku

When it comes to setting up a reverse proxy in Heroku, the recommended way is to set it up using nginx. You might want to do this, for example, if you want to short-circuit an app and forward to somewhere else, or if you are not happy with the capabilities of the app's web server and want something more advanced. In either case, nginx is an excellent choice.

There are two options for setting up an nginx-based reverse proxy in Heroku- both of which we'll cover as part of this blog post. Picking the one to use depends on the type of the stack allocated to your Heroku app. Heroku supports either Ubuntu-based stacks (non-container), which allow you to use buildpacks to customize the build of your app, or container-based stacks, where you are responsible for building and deploying your app via Docker. Buildpacks execute before the app is started, and are typically used to install the required dependencies (such as Ruby or Node).

Let's start with the option that is more suitable for container stacks:

In this solution, a Docker container is responsible for running nginx. You build the Docker image locally, and then push it to Heroku's Docker registry after which it can be used in the app.

To show you how to set it up, let's first create a Heroku app from scratch:

Create the nginx config template file and name it nginx.conf.template:

The reason why the configuration is suffixed with .template is that this is actually a template configuration that will be parsed by a function inside the Docker image. This is a special feature of the Docker image that has been added recently, and allows you to inject values of environment variables into your templates. This is absolutely necessary in Heroku because any web server running in Heroku must listen on the port provided by the PORT environment variable. This means the port nginx is listening on must be determined in runtime, not hardcoded in the configuration.

Next, create the Dockerfile with the following contents:

Then push it up it so that it is used by the app:

That's it. If you now run heroku open you should see your Heroku app reverse-proxying to Google.

This solution is the best fit for non-container apps. Normally, buildpacks are used to install the dependencies of your app. But in this case, the nginx buildpack allows overriding your app's web server. In the nginx buildpack, you can run nginx either in solo mode (if you want to run only nginx, without the web server) or in a non-solo mode where nginx runs alongside your web server.

In our example, we are running it in solo mode, effectively short-circuiting our app.

In an existing Heroku app, under the Settings page, add a new buildpack using the following URL: 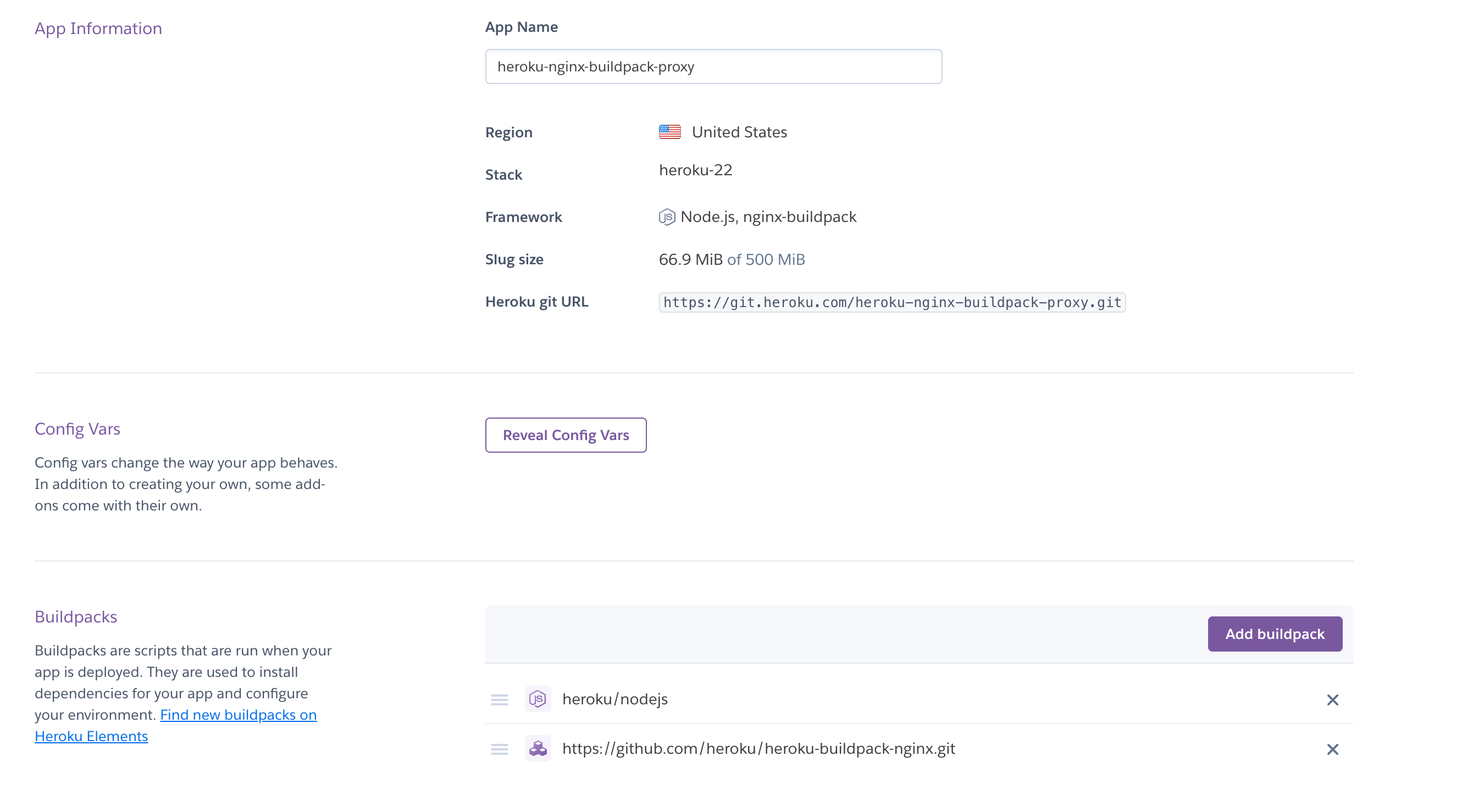 In your repository, create a new Procfile with the following URL:

The nginx buildpack expects the nginx config to be in config/nginx.conf.erb. This is a template file in the Dockerized nginx option, but this time Ruby syntax is used (ERB stands for Embedded RuBy). Create that file and insert the following content:

Now Git push to Heroku's remote and the buildpack will be in effect. You can verify this by typing heroku open in the shell.

Reverse proxies can be very useful in scenarios where you want a fast, non-blocking web server such as nginx doing the heavy lifting of communicating with the clients. Heroku is very flexible in deploying nginx as we've seen in this blog post. You have two very good options for deployment, depending on your requirements and the needs of your app.

As always, you can find the source code of our examples in our GitHub repository.

Dario is a full-stack engineer who has spent most of his career doing enterprise Java projects. He has always had a hidden passion for frontend, though -- and he is now able to pursue that passion at This Dot. He spends most of his free time with his two sons, but occasionally, he manages to squeeze in some casual sports activities such as jogging, cycling, and soccer.