In April 2020, Evan You, the creator of Vue, started to share some work on a new development server called Vite. Here is the first tweet about the idea that Evan shared. 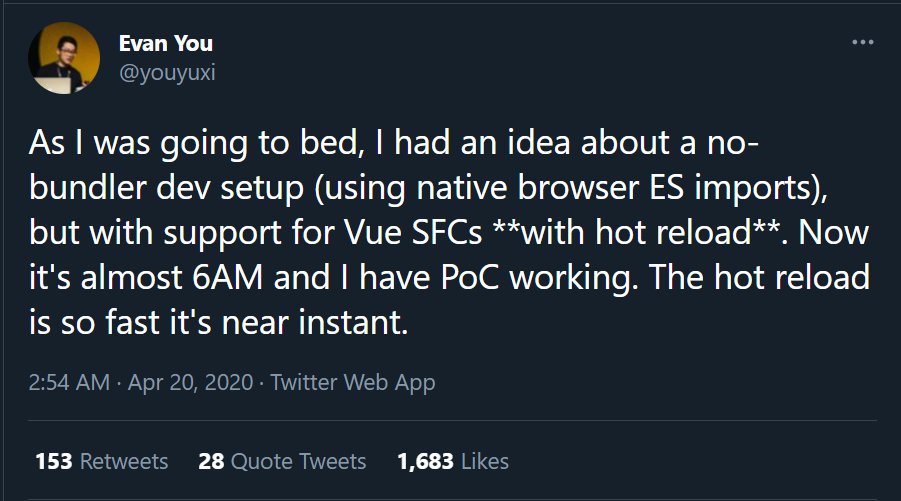 At the time, it was an experiment to see what could be done to improve the development experience for Vue applications. Evan You joked that Vite was created to power an improved version of VuePress for blogging purposes.

Recently, Vite 2 was released as the first stable version, and in Vue Contributer Days 2021 Evan discussed that Vite would be, "the foundation that we are going to be focusing on for future Vue-oriented tooling."

At Vue Contributor Days, Evan noted that, "putting [new developers] through webpack doesn't feel like the ideal experience for a progressive framework," and that Vite was going to be highlighted as the next step as a developer

But what exactly is Vite? How does it work? And how can it be used in development today?

According to the official Vite site, Vite is, "a build tool that aims to provide a faster and leaner development experience for modern web projects." It achieves this in two parts.

First, while in development, application code is not bundled (which is currently how development is done using Vue CLI or Create React App). Instead, the code is imported into the browser using ES Modules, the native module system for Javascript. Since ESM is supported in all modern browsers, Vite can leverage this to completely remove a build step while in development.

Any libraries that need to be imported are still compiled, but for that, Vite uses esbuilt a fast build tool written in Go. Per the Vite website, "Esbuild pre-bundles dependencies 10-100x faster than JavaScript-based bundlers."

Second, Vite provides a build step using Rollup that has been highly optimized for generating static assets. By leveraging Rollup, Vite also provides a diverse plugin ecosystem. Standard Rollup plugins can be used with Vite, as well as custom Vite-specific plugins. [From the documentation]:(https://vitejs.dev/guide/api-plugin.html) "Vite plugins extends Rollup's well-designed plugin interface with a few extra vite-specific options. As a result, you can write a Vite plugin once and have it work for both dev and build."

One key thing to note is that Vite is not Vue-specific. While the original versions of Vite were geared towards Vue 3, the current release of Vite supports any frontend framework, with supported templates for Vue, React, Preact, Lit Element, Svelte, and vanilla Javascript. At its core, Vite is simply a build tool and development environment that can be leveraged by anyone.

To start working with a Vite-based app, open your terminal and run the below command:

A prompt will guide you to select a name for your app and the template you want to use. For this article, we will be looking at a Vue application, but as noted above, there are many options available for building apps in Vite. 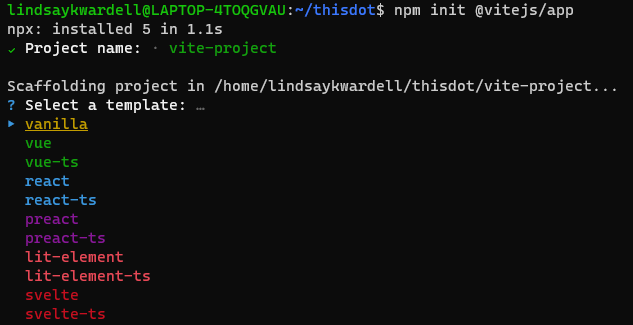 Once you select your name and template, you will be guided to navigate to the newly created folder, run npm install (or yarn). And that's it! Compared to both Create React App and the Vue CLI, this step is much faster, because there's less to install.

Now that your local setup is ready, let's get to work! In your terminal, run the following to get Vite running:

When the dev command is run, esbuild is used to pre-bundle any dependencies you are using (in this case, the only dependency we have is Vue), then provides the URL to open the app itself. For this test, that build step took less than a second (subsequent startup times were around 200ms). For larger applications, it might take longer, but it's only run when Vite finds that your dependencies or configuration has changed. In general, this will only happen occassionally.

Open your browser to the provided URL (by default, localhost:3000), and you will see your app load as expected. If we open the network tab, you will also see that each component is imported into your application separately. This is because we are using ES Modules, rather than bundling everything into a single import. Neat! 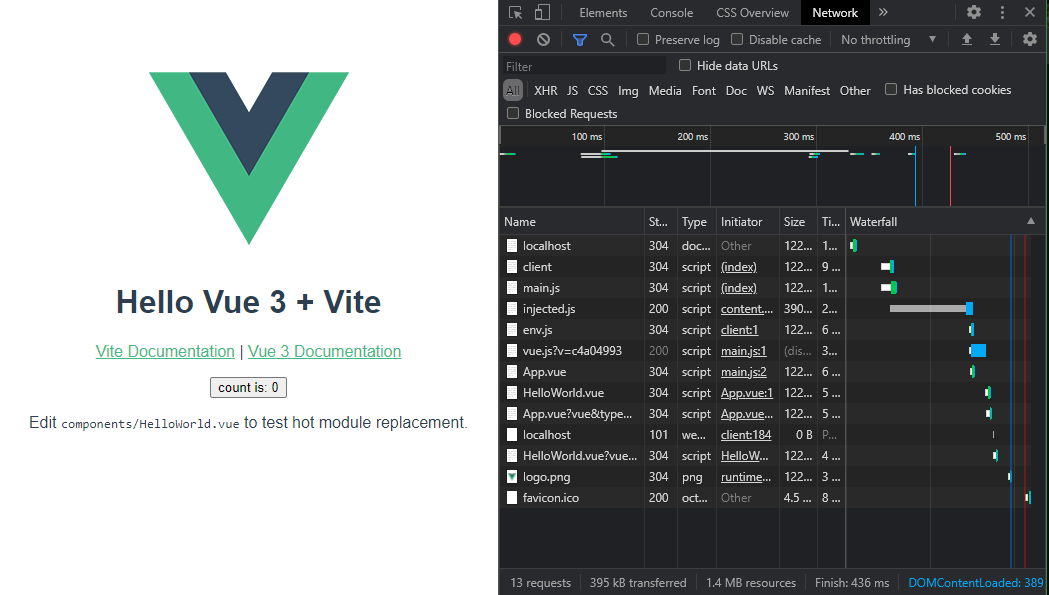 Also of note: As you build out your application, only the relevant code is fetched into the browser. If you have multiple pages, each with unique components, those components will only be loaded as you navigate to those pages.

Let's take a quick look at the file structure. If you're familiar with the Vue CLI, the output from Vite is very similar. The main difference is that the index.html file is located in the root folder, rather than in the public folder. Otherwise, it should be very familiar. 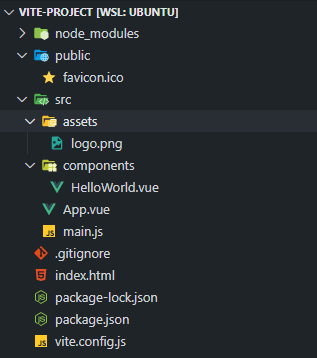 Development using Vite is also very familiar. Create components, import files- everything you are used to doing with Vue CLI or Create React App should work as expected. When you're ready to deploy your app, run the below command:

Vite provides a helpful way to manage any configuration for your project. From the Vite documentation, "When running vite from the command line, Vite will automatically try to resolve a config file named vite.config.js inside project root."

As with a Vue CLI app, vite.config.js allows for a wide variety of configurations, including setting a base URL, any proxies to a backend service, and where to output the build files. In addition, plugins are also added to Vite in this file. Despite being a young platform, there are a wide range of plugins already available (some Rollup plugins can also be used in Vite).

Here's a few notable plugins to be aware of:

There are a lot more plugins and other community contributions to look at as well. Check out this list of awesome Vite plugins for more examples!

The primary benefit of Vite is the development experience. Vite starts fast, loads fast, and allows you as a developer to get your job done better. In addition, the plugin ecosystem allows you to extend your app in numerous ways, all depending on what you want to do. Some opinionated templates also exist, such as Vitesse by Anthony Fu of the Vue core team, that provide additional built-in functionality.

Taking that into consideration, Vite can be used for:

As Evan noted, Vite is the foundation for Vue tooling going forward. At Vue Contributor Days, Evan noted that, "putting new developers through webpack doesn't feel like the ideal experience for a progressive framework." So how does it compare to existing solutions?

Keep in mind that Vite is a development environment, not a framework. The closest true comparisons to Vite are tools like Snowpack or WMR from the Preact team. The Vite site has a complete writeup on comparisons with other build tools. Rather than focusing on build tools, let's compare Vite with existing ways to build applications.

We've already touched on Vue CLI and Create React App, but it's important to point out that Vite is, first and foremost, a development environment and build tool. In the end, it will build a single-page application, just like existing tools. The main benefit to Vite is the plugin ecosystem and the next-generation tooling. If you're comfortable with webpack, then that's fine!

As an aside, at Vue Contributor Days, Evan and the panel talked about the potential for integrating Vite into existing tools such as Vue CLI, and leveraging it for other uses such as Nuxt or Ionic. I strongly encourage listening to it when you have a moment.

While Vite can provide SSR, it is still in an experimental state, and not recommended for production. If you are needing server-side rendering in your application, it's probably best to stick with the existing tooling for that.

That said, there's some work going on at Nuxt to provide Vite for your local development environment. Here's an experimental plugin for integrating Vite into Nuxt 2, with a polished version of this planned for Nuxt 3 later this year.

This one really depends on the kind of website that you're building. Gatsby (and other SSG tools like 11ty, Gridsome, etc) provides plugins to integrate with headless CMS platforms like Contentful or Sanity.io, as well as ways to manage image assets, RSS feed generation, and other features of blogs or documentation sites.

Vite, by comparison, provides none of that for you out of the box. What it can provide is excellent tooling for building a simple site, and generate static assets. We already see that in the Vue ecosystem, both with the SSG plugin mentioned above as well as VitePress, which can provide a fast-loading documentation site (or any other static site you want).

As a build tool, Vite is still fairly new. However, it has already proven itself to be a fast development environment, leveraging modern tooling and language features to provide an excellent developer experience. While it may not replace existing tooling such as Vue CLI for some time, Evan has decided that it is the way forward for Vue tooling. Its fast uptime and vibrant community will only grow with time.

Next time you need to spin up a quick app in Vue or React, try using Vite for yourself! I look forward to see what you think!