Bun is a modern JavaScript runtime like Node or Deno focused on speed, and performance. It is an all-in-one tool (runtime, bundler, package manager, transpiler).

In this article, we will look at the excitement behind it, and dive into some features.

Bun is developed from scratch using the zig programming language. It uses JavaScriptCore Engine (Same with Safari browser), which is unlike Node.js and Deno, which use Chrome’s V8 engine. Bun natively implements hundreds of Node.js and Web APIs, including ~90% of Node-API functions (native modules), fs, path, buffer, and more. Plus, it supports Typescript and JSX out of the box.

To install Bun on our machine, simply run the command:

For Mac, Linux, and Windows Subsystem.

Now run bun --version to verify that it is correctly installed.

Create a javascript file called http.js and add the following:

Then open http://localhost:3000 in your browser.

You can create the same file in Typescript as http.ts and run:

Then open http://localhost:3000 in your browser.

Without modification or extra installation, we now have scripts in JavaScript and Typescript running.

Let's dive into some of the features of bun.

Bun supports node packages and provides some integration with the latest React ecosystem with the create command.

Bun uses node_modules.bun to house all the imported dependencies. Let’s add React to our new project.

Bun will generate the node_module.bun file in the directory.

For an existing application similar to yarn or npm to install dependencies with bun, simply run bun install in the project directory.

It will use the existing package.json in combination with the lock file when present to add dependencies.

To scaffold or create a new project from a template, framework (React), or blank project, use the create command.

🔗SQLite3 Out of the box

With Bun, you don’t have to install SQLite as it’s built-in out of the box.

Run the code with bun run db.js, and you should see the records that are inserted logged on the terminal.

Bun automatically loads environment variables from .env files. No more require("dotenv").config() and you can simply access proccess.env without needing to install packages.

Create an .env file with the following:

Run the code with bun run http.js, and you should see the NotReallyA_Key logged on the terminal.

Hopefully this article showed you how easy it is to get started with Bun and the features you should be excited about.

The Bun approach to performance is truly a big win for the community. 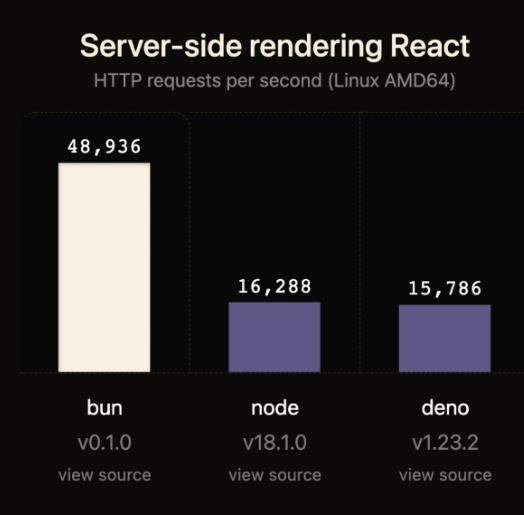 Bun is still young and seems to have a promising future. Will Bun replace Deno or Node? That is too early to call, as both existing runtimes have been around for a while and are actively maintained and features are being added often with constant improvements on the existing APIs.

Bun does not yet have a stable release (as of this writing) and is still very early in development.

What’s your opinion on bun or some exciting projects you might build or migrate with bun?